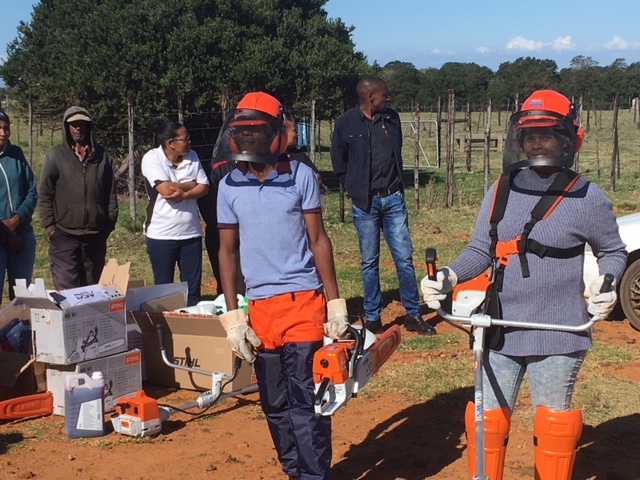 Natural resources exist throughout the country, but the challenge is how to effectively utilise these resources. An Alien Eradication and Biomass Programme, which has been launched in Jeffreys Bay, is tackling this issue, by providing an environmental answer to the issue of alien invasive vegetation and sustainable local employment. Funded by Jeffreys Bay Wind Farm this Programme focusses on the need to create employment for the local communities of Hankey, Patensie, Jeffreys Bay and Humansdorp, whilst using a technique of converting alien biomass into a soil enhancer that can hold carbon, boost food security, and increase soil biodiversity by helping soils retain nutrients and water.

Throughout the Eastern Cape, Alien Invasive Vegetation is a massive environmental and agricultural problem and the removal of this vegetation has been a focus of several groups. Hence this has been a catalyst to the programme. However, the beauty of this programme is that it produces a valuable and sustainable commodity.

“The Biomass Programme is one of those rare situations where the harvesting of the natural resource is a critically needed environmental intervention that results in a sustainable salutation for both man and the land that we depend on” explains Brad Ker-Fox from ABI Africa, a local enterprise that is specifically focused on developing rural communities within the Agriculture industry and associated primary sector opportunities.

It is acknowledged as a major problem in the area and is causing billions of Rands of damage to the economy. This is through the negative impact on primarily our water resources as these species are occurring along the water courses and river beds and remove our already scarce water from the environment.

The biomass produced by the harvesting of these species is converted into carbon rich material which can be an important tool to increase food security and cropland diversity. This is specifically for areas with severely depleted soils, scarce organic resources, and inadequate water and chemical fertilizer supplies. Species to be targeted in the area include Acacia Longifolia, Acacia Mearnsii, Acacia Saligna, and Eucalyptus Pinus Acacia.

The programme kicked off in March 2019, with the development of a sound principle that would alter the programme from a subsidised clearing initiative which may last only a few years, to a commercially sound harvesting initiative which could essentially fund itself for the foreseeable future. The first local team were trained and received their certificates and equipment and started last month (September 2019), with more local teams now being trained.

The Alien Eradication and Biomass Programme correlates with the Livestock Improvement and Grazing Management Programme and Fodder Production Programme, which culminates in the ability of rural farmers to promote food security as well as increase their income while encouraging biodiversity conservations within the Eastern Cape. All three of these projects are funded by the wind farm, as part of its socio-economic development programme.

“Jeffreys Bay Wind Farm has become a forerunner in funding local environmentally sound initiatives implemented in the local communities and a driving force behind regenerative forms of agriculture and land utilisation. This is coupled with a focus on creating long-term impact on its local communities through education and sustainable economic initiatives,” added Ker-Fox.

Sustainable agriculture in the Eastern Cape ultimately seeks to sustain farmers, resources and communities by promoting farming practices and methods that are profitable, environmentally sound and good for communities. It is crucial to the environment as it protects and enhances soil quality thereby putting an end to soil erosion and desertification, it also contributes to protecting dwindling water resources and it increases biodiversity by re-establishing a variety of naturally occurring organisms.

Sustainable agriculture addresses the primary need of human survival through the production of plant and animal products, including food, in a way which uses farming techniques and technology that protect and enhance the environment. This also addresses issues around the health of consumers, development of employment opportunities in rural communities, and the welfare and treatment of animals.

“Only by mobilizing social, economic and environmental action together can we eradicate poverty irreversibly and instil a sense of custodianship over our natural environment,” concluded Ker-Fox.