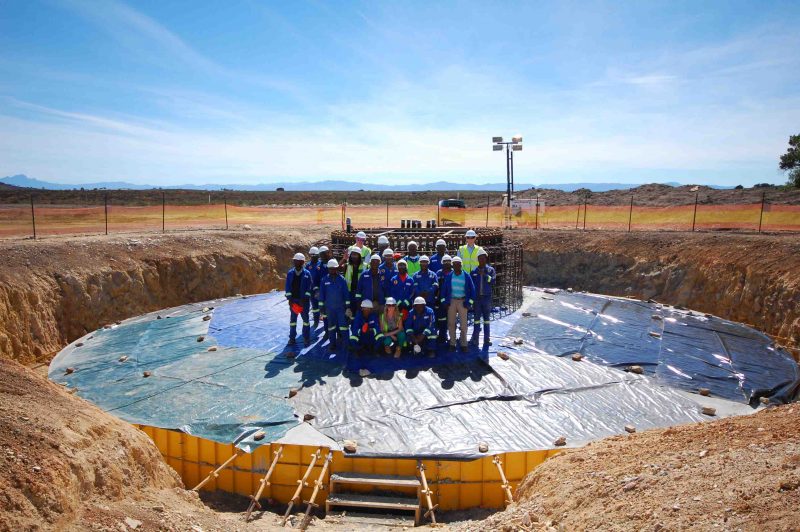 As the country embarks on the development of a renewable energy industry, the management team at Jeffreys Bay Wind Farm believes that the primary focus of skills development should be the development of a workforce that can sustain the industry over time without long term reliance on off shore expertise. Hence a competent workforce is being developed to meet the skills requirements of the renewable energy industry on a provincial and national level.

In addition to employing 80% South African’s on site, the project is focused on the local communities, ensuring that the employment and development benefits are kept within a 50km radius, wherever possible. Eden Syce, resident of the local Pullrus community in Jeffreys Bay, is one of many community members who has benefited through training and skills development, which is a critical area in the Renewable Energy industry.

Originally employed as a general worker, Syce is now employed as a Quality Assistant and can pride himself on a number of achievements. Over the last seven months, he has completed and rated highly in a number of courses, including a week’s ISO 9001 training in Pretoria, which encompassed the implementation and evaluations of quality systems. Having achieved almost 80% in the exams, his confidence has increased in proportion to his training.

“Since I’ve been working on this project my self-discipline and confidence has improved enormously, as well as my attitude towards life’s challenges and handling my responsibilities, both at work and in my personal life,” said Eden Syce, Quality Assistant at Jeffreys Bay Wind Farm. Other training and competencies have included Health and Safety Representation, First Aid, Fire Fighting, Rigging and Slinging and Scaffold Erection.

Coming from the Pellsrus community, whose income is highly dependent on the fishing industry, Local Municipality and surrounding business, community members like Syce, welcome other opportunities and especially the chance to get training in an industry that has such great potential. “This community is also very dependent on the building, retail and clothing manufacturing sectors, all of which are in a current economic downturn,” explained Pickering

The Eastern Cape is undoubtedly one of the primary regions that has been able to capitalize on the employment opportunities that this new sector offers, especially during the construction phase of the various wind farm projects, which require large numbers of labour from the local communities. At the peak of construction, there were 602 people working on the Jeffreys Bay Wind Farm site, 45% of which were from the local communities in the Kouga Municipality.

Jeffreys Bay Wind Farm began erecting the first of its 80m tall turbines in August this year. The project is one of the first wind farms arising from the South African Government’s Renewable Energy Independent Power Producer Procurement Programme (REIPP) and is expected to start supplying electricity to the national grid by mid-2014.

When complete the project will be able to provide a significant number of homes with clean, renewable energy by harnessing the wind, and will save millions of litres of water that would otherwise have been consumed in the production of energy.