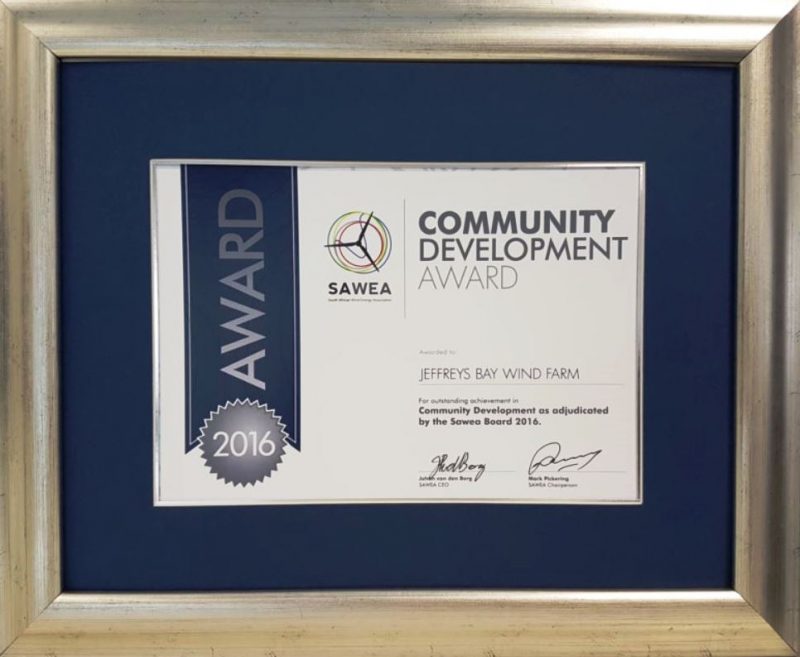 The South African Wind Energy Association (SAWEA) has recognised and awarded Jeffreys Bay Wind Farm for building and implementing their economic development programmes. The ‘Community Development Award’, as adjudicated by the SAWEA board, was handed over to Marion Green-Thompson, the Economic Development Director, at an event held at the CITCC, in Cape Town, on 2 November 2016.

“This is a important accolade for our organisation, the team at Jeffreys Bay Wind Farm, and the various community organisations and government stakeholders that we work alongside to implement our socio-economic development and enterprise development programmes,” said Green-Thompson. She added, “We are humbled by the communities that have welcomed us and who enthusiastically work alongside us to ensure that our support is impactful and effective”.

Jeffreys Bay Wind Farm’s community initiatives are focused on uplifting the communities of Jeffreys Bay, Humansdorp, Hankey, and Patensie. The various community programmes that are funded are aimed at promoting access to the economy for local people and placing financial resources into the local area.

ENERGY FACT #6
Wind power is one of the fastest-growing sources of electricity production in the world.
See more facts